The power and influence within businesses.

There have been many articles written relating to the impact of power and influence within an organizational.  It was Handy (1993) however, who categorized the styles of leadership in what he called “The Gods of Management”. There is evidence to indicate that Handy has in fact missed an important group, which could be argued links to, what thisreport calls, the “culture of uncertainty”. This group relates to those individuals who find themselves in positions well beyond their capabilities and/or behave in a continual confrontational nature. In keeping with Handy’s theme, this report has classified these individuals as “Perses: god of destruction”. It is a trait that is likely to be inherent in the other “gods” but can be suppressed by continual development or education (see figure 1.1). 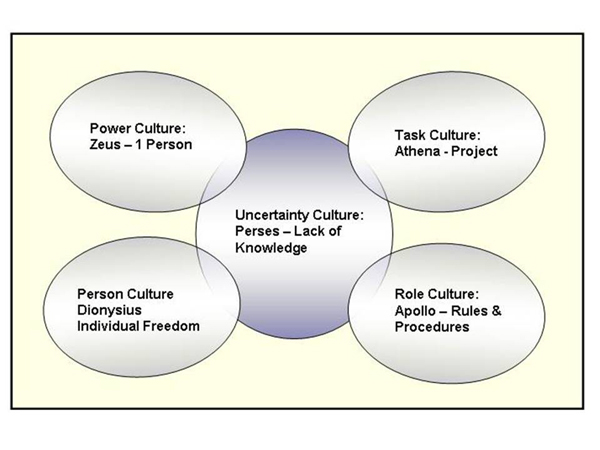 There is an argument that only those individuals with the influencing and/or perceived power within a company dictate the decision making processes. Are these individuals the CEOs, presidents, directors and vice-presidents? No, they often rely on individuals who run specific business units, categories or functions to provide leadership, technical competencies and guidance. This can result in a variety of sub-cultures being created within an organization. This is not necessarily a bad thing, because as Hofstede (2010) stated, there is no such thing as a universal management method or management theory across the globe.

The game of politics.

When faced with enormous business obstacles, an individual cannot simply demand that changes must be made. The adoption of Karl Weick’s approach to disagreement may be a better approach, but when dealing with individuals playing the politics game other tools and skills are required. Jones (1985) said that there can be no doubt that politics will occur in all companies at some level. He came up with four management practices to reduce the impact:

Unfortunately, executing these practices in isolation will not be enough. A variety of leadership techniques will be also be required if the implementation of the new marketing plan is to be a success. Table 1.1 illustrates how the adaptation of Goleman’s 4 positive leadership impacting styles will be used to facilitate the process:

It is clear that power and influence within an organization can have a major impact on how it is run and how plans are delivered. Motivation also plays an important part: it is the transformational leadership that will help encourage individuals to work collectively in achieving the ultimate goal, or as Maslow (1954) stated, create conditions in which people can satisfy their “self-actualization” needs.

Above all else, a certain level of competencies will be needed by organization’s managers. So the creation of a structure that encompasses transformational and competency-based leadership qualities will be vital for the future success of businesses.

To read the document with full referencing please click on the link below:

Power and Influence in Business (with References)

This entry was posted in Research and tagged Business, Influence, Power.